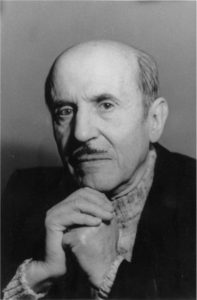 Albino Pierro was born in Tursi, a small town in the province of Matera, on 19 November 1916. His childhood was marked by the loss of his mother, Margherita Ottomano, who died when the poet was still wrapped in a swaddling blanket. The maternal figure and the native town (“A terra d’u ricorde”) are fundamental terms of the poetic Pierrian story (“Ma iè le vogghie bbéne ’a Ravaténe/ cc’amore ca c’è morta mamma méja”). The father, Salvatore Pierro, landowner, marries again while Albino is entrusted to the care of the aunts Assunta and Giuditta, two figures that appear in the verses of the mature poet.

The years of apprenticeship are consumed by the young and restless Albino between Taranto, Salerno, Sulmona, Udine and Novara. In 1939 he arrived in Rome where he settled permanently. In 1944 he graduated in philosophy and began teaching history and philosophy in high schools. In the forties, already cheered for the poet by the birth of his daughter Maria Rita, he began his collaboration with the magazines «Rassegna Nazionale» and «Il Balilla».

From 1946 to 1967 Pierro published poetic collections in language, «testimonianze già valide ed eloquenti della sua vocazione lirica» [already valid and eloquent testimonies of his lyrical vocation] (A. Pierro, Pierro Albino, in Autodizionario degli scrittori italiani, Milan, Leonardo, 1989, p. 272). But it is with the verses in dialect that the poet gains a place of honor in the panorama of twentieth-century Italian poetry.

The Lucanian dialect of Tursi, despite having attracted the attention of philologists and linguists such as Rohlfs and Lausberg, was literally virgin when Pierro decided to adopt it («Forse il bisogno di testimoniare meglio le mie origini più autentiche sarà stato ridestato dall’assenza, dalla distanza. Si trattò di recuperare un linguaggio che era appartenuto al mio passato e al passato della mia gente», in A. Pierro, Nun c’è pizze di munne, Milan, Mondadori, 1992, p. 105) [Perhaps the need to better witness my most authentic origins will have been reawakened by the absence, by the distance. It was a matter of recovering a language that had belonged to my past and to the past of my people]. The first poetic collection in Tursitano dates back to 1960, ‘A terra d’u ricorde: «Questo idioma, arcaico negli aspetti fonici come nel lessico, si presta mirabilmente a esprimere gli stati d’animo del poeta, volutamente ricondotti a una dimensione elementare e primitiva» [This idiom, archaic in its phonic aspects as well as in the lexicon, admirably lends itself to expressing the poet’s moods, deliberately brought back to an elementary dimension and primitive] (A. Pierro, Pierro Albino, cit., p. 272). The «parlèta frisca di paìse» becomes in Pierro’s verses «ultima lingua della poesia romanza» [last language of romance poetry] (Folena). For just the most authoritative critics of the native letters deal with Pierro’s poetry (see the bibliography), while the Tursitani verses are translated into the most varied languages ​​of the world (French, English, German, Swedish, Persian, Arabic, Neo-Greek, Portuguese, Spanish).

In the eighties the first official recognitions arrived and the University opened its doors to the Lucan poet. In 1985 he was invited by the University of Stockholm to read poetry. In 1992 the University of Basilicata awarded him an honorary degree. In 1993 the Scuola Normale Superiore of Pisa organized a meeting with the poet. Several times Pierro is approaching the Nobel victory, an expected recognition, but missed.

This bibliography has no pretense of completeness at all. Rather it aims to be essential, especially with regard to the section dedicated to critical contributions. The intent is simply to “bring closer” to Pierro’s work those who ignore it or hardly know it. The expert reader knows very well where to find more or less comprehensive bibliographic records.

Poems in the language